THE INDIGENOUS & THE FOREIGN
Jesuit Presence in 17th Century Ethiopia

European texts and maps on Ethiopia

This group of documents reflect the peculiarities of the extant European literature about the Abyssinian kingdom, a literature where travel and scientific exploration of that country have always tended to go hand in hand with mythical representations and cultural misunderstandings.

In 1610, the Dominican friar Luis de Urreta (ca. 1570-1636) wrote an Ecclesiastical, Natural, Ethical and Political History of Ethiopia, a late example of a stream of European geographical fantasies where Ethiopia was presented as the wondrous and utopian-like kingdom of Prester John. He fantasized about a supposed ancient Dominican presence in Ethiopia, and argued that they should thus be given precedence over the Jesuits as Catholic missionaries in that country.

The Jesuits reacted immediately to Urreta’s writings, and published harsh refutations of the Dominican’s views, based on information forwarded in the letters and reports written by Jesuit missionaries in Ethiopia (Fernão Guerreiro, Addition to the Relation of Ethiopia, 1611; Nicolau Godinho, Of Abyssinian Matters, 1615). The most prominent of these refutations, was Father Pedro Páez’ History of Ethiopia (c. 1622), a long and vivid account of Ethiopia, the Jesuit Mission, his own personal adventures in the country, and his explorations of the source of the Blue Nile. Although it was not published before the early 20th century, it was later rewritten by Father Manuel de Almeida (History of High Ethiopia or Abyssinia, c. 1645), who reduced the weight of Páez’ refutation of Urreta but used most of the information provided on Ethiopia, on such diverse aspects as geography, zoology, theology and politics, and the role of the Jesuits in Ethiopia.

Like Páez’ manuscript, Almeida’s wasn’t published. It was much later, in 1660, that Father Baltazar Teles, the then Superior of the Portuguese Province of the Society of Jesus, who had never set foot in Ethiopia, published a much-reworked version of the book, now called History of Ethiopia or Prester John. Almeida’s original manuscript was lost but three copies have survived: one is in Lisbon, another in the British Library and yet another in the SOAS Library. Almeida composed also a precious geographical, political and religious map of Ethiopia, which he attached to the manuscript of his book.

In the second half of the 17th century, the German scholar Iob Ludolf (1624-1704) published a series of books on Ethiopia. In the second edition of his Ethiopian History (1684), he inserted a map clearly inspired in Manuel de Almeida’s, which he knew from the version published by Teles – as indicated in the box drawn in the left-hand side of the map. Among the different curious aspects of his map, we can see a representation of Dankaz as a tent city, in the fashion of the 16th century Iberian maps about Ethiopia. 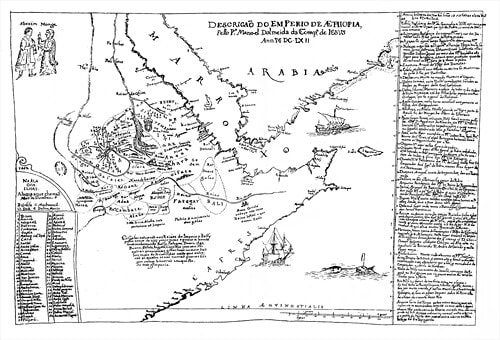 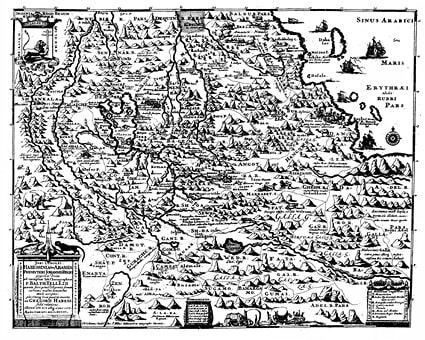